Siri and I have a long-troubled relationship. I don’t know how it all started. I just know it is all Siri’s fault.

I mean, yes, I take my frustrations out on Siri. Yes, I speak to Siri with strong Spanish words. OK.! I confess, you got me, I curse to her in Spanish, and take it all out on her in Spanish, my native language. Olé.! 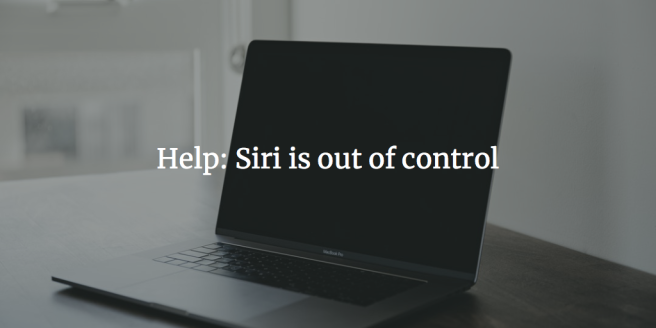 But I wasn’t expecting revenge. Yes, revenge was served.

I am writing my first proper novel. Well, let’s better rephrase that. I am trying to write my very first novel. And I was in the middle of a heartbreaking scene listening to “unbreak my heart” from Toni Braxton, feeling it all to put down on the paper, when suddenly Siri, shut my playing list. My sad-songs playing list. And, yes, the scene went down the hill. And I wasn’t able to recover. And before you can defend Siri. Yes, it was Siri, because I heard her little annoying beeping before Toni Braxton was cruelly shut.

Maybe I deserve it. Maybe this is all my fault for not being kind to Siri. I said “maybe.” But know this Siri; I will have your guts for garters.

View all posts by